Swedish freestyle, poetry and rap A-lister “Kung” Henry Bowers will be giving a live performance, his first ever on Finnish soil, at the premiere of the new W/ord culture festival at Café Mascot on Saturday 17 Nov 2012. Drawing its theme and its inspiration from a freeform coalition of poetry, rap and spoken word, the festival features international superstar Henry Bowers, known throughout the Swedish and English-speaking world for his freestyle battles, spoken word poems and aggressive rap tracks. 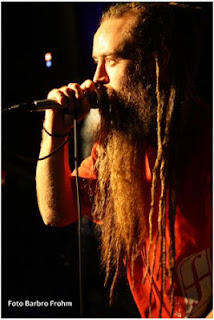 In recent years, the combining of poetry and rap and the rapid rise of free-for-all poetry open mic events have helped birth a national phenomenon in Finland. In his cultural smorgasbord of a homeland, the industrious Bowers himself has been a force for good on the poetry/rap combo scene for years. And if any one event can be said to have had an overwhelming hand in putting performance poetry on the map in Finland, it is the Helsinki Poetry Jam club, which will be ushering in the new W/ord festival on its first night. The opening evening will see, among others, nationally recognized Swedish performance poet Malin Jakobsson and Finnish poetic legend Teemu Hirvilammi, who will also be releasing his newest poetry album with composer Ari Taskinen after an eleven-year break. Other acts will include the music group Koivuniemen herrat, headed by rap-artist Shaka, and founder of the Helsinki Poetry Connection, Harri Hertell, alongside dub-producer Papa Jahman.

The distinctly wizardly W/ord festival headliner, Henry Bowers (real name Nils Jansson), began his glowing career in the early 2000s on the Swedish poetry slam circuit. Even then his performances were characterized by a special blend of rap, poetry and social commentary-infused stand up comedy. He emblazoned his mark on the performance poetry scene for good in 2004 when he took first place in Sweden’s national poetry slam competition. Since then, Henry has performed on stages great and small around the globe. His style is a unique mix of music, poetry and an acute sense of social and situational awareness. In Swedish he dons the alter ego of Kung Henry, while his English material sees daylight under the Kingian pseudonym Henry Bowers — in his coming show in Finland, he will perform in both languages.